Do you think Hillary Clinton's people see it as a victory that they edged out Anna Nicole Smith or a defeat that they just barely edged her out? 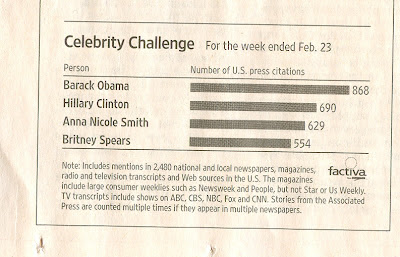 I just don't get tired of fun with text mining.
(Note: This is a continuing feature of Factiva Insight's text mining results being run in The Wall Street Journal.)
by Glenn Fannick at 2:11 PM 0 comments links to here 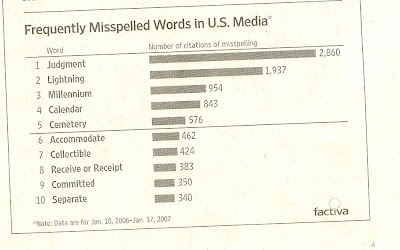 Biz360 just added another metric to its offering -- this one promises to measure media influence in the social media space. B360 has such a index for mainstream media already. Others, such as Delahaye, offer such a measurement too.

We've heard praise and criticism for this concept of "magic numbers" -- indices that fold together various quantitative and qualitative measurements (reach, influence, tone, etc.) into one number. The idea is that brand managers and others can more easily track the rise and fall of their brand's image by monitoring a single metric. I'm a bit dubious of the value of such a number, but people seem to gravitate to the simplicity of them.

Of course such numbers don't "mean" anything in an of themselves just like the Dow Jones Industrial Average has no meaning by itself. It's just a number -- but I suppose a very powerful one because it allows comparison of a concept over time.

But what many people don't think about is the fine-grain tuning that goes into these numbers behind the scenes. Are media magic numbers valuable if you don't know what goes into them? After all Dow 10,000 is not the sum of the value of a single share of each of the 30 stocks in the index. It is that sum divided by a something like 0.13500289 (known as the Dow Divisor). This number is changed from time to time to allow for continuity of the value of the index as the stocks in it change or are split, etc.

Why do people trust the Dow? it is because the number's been around for more than 100 years? Or because it's from Dow Jones? I don't think because people understand what the number itself means.

by Glenn Fannick at 9:41 PM 1 comments links to here