Barack Inching Ahead -- in Media Mentions

While we all know the news from the polls is that Barack Obama is on a roll and has taken over the lead in the delegate count, a more subtle switch has also occurred since about Super Tuesday. Obama is leading over Hillary Clinton since then in the total number of media mentions (the individual occurrences of the person's name). Before Super Tuesday, Clinton was most always ahead of Obama.

So while the number of documents in which each gets mentioned is about the same (essentially, you can't write about one without at least mentioning the other), the number of mentions within those documents has switched.

Have the members of the press shifted their collective mindset? Are they subconsciously jumping on the Barack bandwagon? 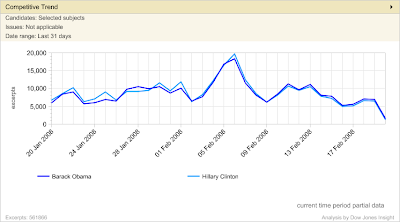 by Glenn Fannick at 4:24 PM 0 comments links to here

The blog post title (A Complete List of the Many Forms of Web Marketing) sounds audacious, but it's pretty darn accurate. Mr. Owyang succeeds again at codifying something many of us feel overwhelmed by.

by Glenn Fannick at 9:16 PM 0 comments links to here

Walt Mossberg addressing right now Dow Jones IT staff on how web is impacting Journalism and our lives.
- he doesn't have much time any more to read the paper versions of the "3 best newspapers in the world": wsj, washingtonpost, nytimes. Because more of his time is reading content that never existed before
- his kids don't read newspapers, but one subscribes to wsj.com rss feeds
- in 10 yrs the internet of today will look archaic - like a 1960s mainframe
- people will soon stop talking about "the internet" the way we don't say "I'm going to go on the electrical grid now"
- the PC has already peaked as the dominant digital device
- the iphone is significant milestone because it's at it's heart a PC
- multitouch features changing the way we interact with devices
-expects blackberry to take a big leap forward to catch up with iphone

by Glenn Fannick at 1:36 PM 0 comments links to here

How Nonprofits Can Use Social Media

During our recent Webinar we received a few questions about how non-profits can make use of social media tools. I admit we didn't do the best job answering this question and some of you called us on it. Perhaps it's because Dow Jones (and perhaps Forrester) don't have too many clients in the non-profits space so our personal experiences don't go in that direction.

I mentioned during the Webinar, that I personally volunteer (with the local Habitat for Humanity affiliate) and we make use of the Web as a way to get our message out, to raise funds and to get volunteers. These are obvious examples.

But I'm sure others have better ones. I found this blog and will be spending time reading it.
Beth's Blog: How Nonprofits Can Use Social Media

Do other people have examples of how non-profits and social media have found happy marriages.